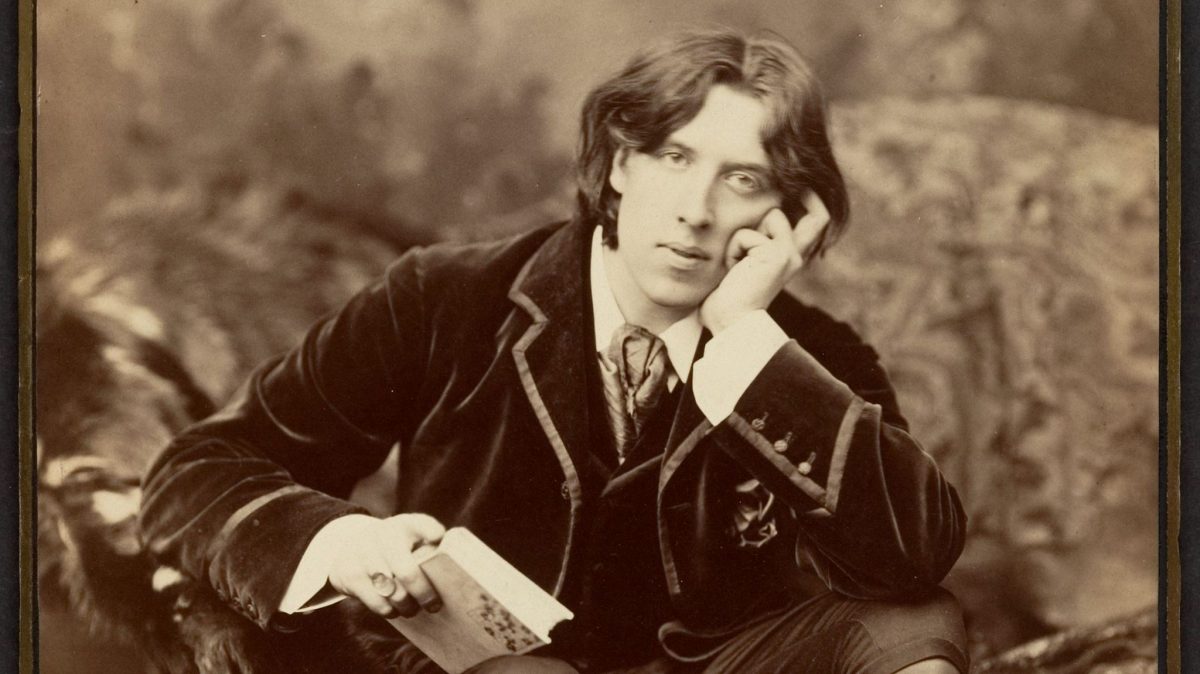 Oscar Fingal O’Flahertie Wills Wilde died this day November 30, 1900 at age 46 in Paris, France. The tomb of this brilliant essayist, eminent playwright, poet, and society wit in Père Lachaise Cemetery was designed by American sculptor Sir Jacob Epstein. Throughout the 1990s, the tomb became covered in lipstick kisses that were slowly destroying the porous limestone with each cleaning. The French and Irish governments came together and created a fund to restore the tomb, which is now behind a protective Plexiglas casing.

On November 30, 1900, at two o’clock in the afternoon, Oscar Wilde died of an infection to his inner ear with the added complication of cerebral meningitis (the results of an injury sustained while serving a two-year sentence in Reading prison for his legendary homosexual affair). He died in a rented room that had been his home since 1898, in the Hotel d’Alsace, 13 Rue des Beaux-Arts in Paris.

Wilde’s ill-fated relationship with the Marquis of Queensbury’s nephew, Lord Alfred “Bosie” Douglas, not only resulted in his trial and imprisonment, but also created a great scandal. Once that scandal subsided upon his death, Wilde’s remains were moved in 1909 from Bagneux Cemetery, outside Paris, where he was first interred in 1900, to Père Lachaise.

Since the Wilde estate was bankrupt at the time of his death, there was a great concern over arranging a permanent burial place, much less an appropriate monument. However, through the patronage of Helen Carew, a friend of Wilde’s and a member of the playwright’s circle (which included William Rothenstein, Max Beerbohm, H.G. Wells, Charles Shannon, and Ronald Firbank), the commission of a tomb was secured.

Robert Ross, Wilde’s first male lover and the literary executor of his estate, announced the award of the sculpture commission at an elegant dinner at the Ritz Hotel, where he was celebrating the success of the publication of Wilde’s De Profundis, plus a fourteen-volume collected series of all his writings. (Immediately following Wilde’s death, Ross had spent many years buying back the lost copyrights for his plays and stopping the many unauthorized and pirated editions of his works.)

A startling sculpture by the American artist Jacob Epstein now marks Wilde’s place of rest. The scandal provoked by this sculpture was the last associated with Wilde. It shows a markedly virile sphinx, crowned with a tiara, and emerging from a mass of stone.

At the time when the tomb was commissioned, Epstein found himself at the center of a scandal over the aggressive nudity of the sculptures he had just completed for the British Medical Association headquarters in the Strand. In 1912, after nine months of intense work on the ten-ton piece of stone, he finished the Wilde piece and opened his studio for a press preview. After the Strand controversy, he was surprised at their praise of “Mr. Epstein’s dignified sculpture.”

This praise was not shared by city officials; and after a one-month delay in the installation at Père Lachaise, the Prefect of the Seine and the Conservateur of Père Lachaise banned the work from going on public view due to the enormity of its genitals. A tarpaulin was thrown over the entire monument, and two gendarmes were posted at its side. Epstein continued to work on fine-tuning the elaborate headpiece on the figure; but following a compromise (Robert Ross acquiesced to having a bronze leaf cover the offending parts), he refused to attend the final unveiling. Eventually the controversy faded into obscurity and, after a time, both the tarp and the fig leaf were quietly removed.

It wasn’t until 1961 that the tomb became enmeshed in controversy again. Two English ladies walking in Père Lachaise could not control their indignation when they saw the representation with its frankly male parts. As the story goes, the ladies took stones from the border of the walk and broke off the testicles. One of the cemetery caretakers delivered these artifacts to the office of the Conservator, where they served as paperweights before their subsequent disappearance.

Today, the monument is a place of pilgrimage for Paris’s gay community, and flowers are frequently left for “the martyred poet” and in memory of Wilde’s lifelong friend and champion, Robert Ross, whose remains are entombed with him.

An epitaph in Wilde’s own words is carved into the stone:

And alien tears will fill for him
Pity’s long-broken urn
For his mourners will be outcast men
And outcasts always mourn.