Who will you seek out on your pilgrimage to Père-Lachaise? 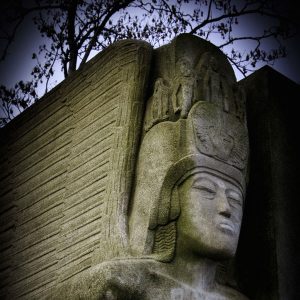 What stories do you remember most about a loved one who has passed? When I made my first visit to Père-Lachaise, I was in search of Oscar Wilde’s grave, prompted by a friend whose ancestor, Sir Jacob Epstein, had designed the controversial tomb with its markedly large male parts. I was inspired to read Wilde’s Ballad of Reading Gaol, written while he was in prison, and found an excerpt from that work inscribed on the back of his tomb.

I highly recommend reading the biographies of those you choose to visit in Père-Lachaise, not only for the perspective of their creative contributions, but also for the pleasure of immersing oneself in the history of Paris during those artists’ lifetimes.

Here are a few anecdotes about some of my favorite grave sites: 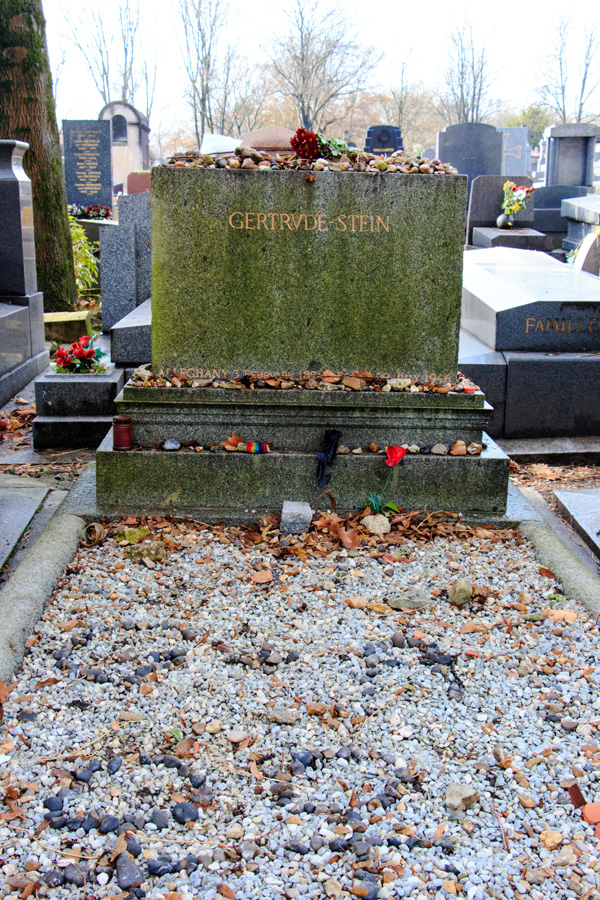 Don’t be thrown off when you see the incorrect date of death on Stein’s tomb (1947), the misspelling of her birthplace (Allfghany, Pennsylvania), or the absence of Alice B. Toklas’s name. Stein passed in ’46, was born in Alleghany, and her loving companion Alice’s name appears on the back of the low granite headstone. You may find small pebbles left on her tomb as symbols of remembrance, a Jewish tradition that is repeated at several grave sites in this area. Stein loathed doctors; and her long-ignored problems with colitis led to stomach cancer. She died on the operating table at the American Hospital in Paris. Twenty-six years later, before she passed away, Toklas requested that her name be on the back of the tomb, always in the shadow of her life partner. 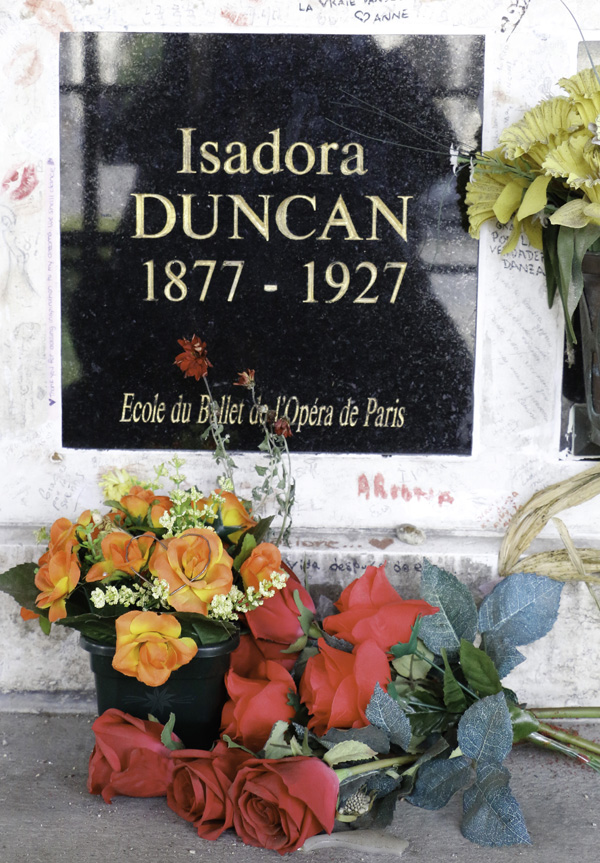 Born in San Francisco, the dancer/choreographer was the quintessential post-frontier California free spirit. Duncan’s personal life was both unconventional and tragic. An advocate of free love, she had a daughter, Deirdre, by British stage designer Edward Gordon Craig and a son, Patrick, by Paris Singer, the American heir to the sewing-machine fortune. With many successes also came many defeats. Almost penniless by age 49, she gave her final performance in Paris in 1927 and died that September in Nice in a particularly infamous auto accident. While riding in a convertible with a young mechanic, her signature long white scarf caught in the spokes of the rear wheel and she died instantly from a broken neck. According to her wishes, her body was taken to Paris and cremated; 4,000 people attended her memorial. Fourteen years earlier, both her children had drowned in a freak accident when the car they were riding in rolled into the Seine. Their remains rest in a niche in the columbarium with their mother. 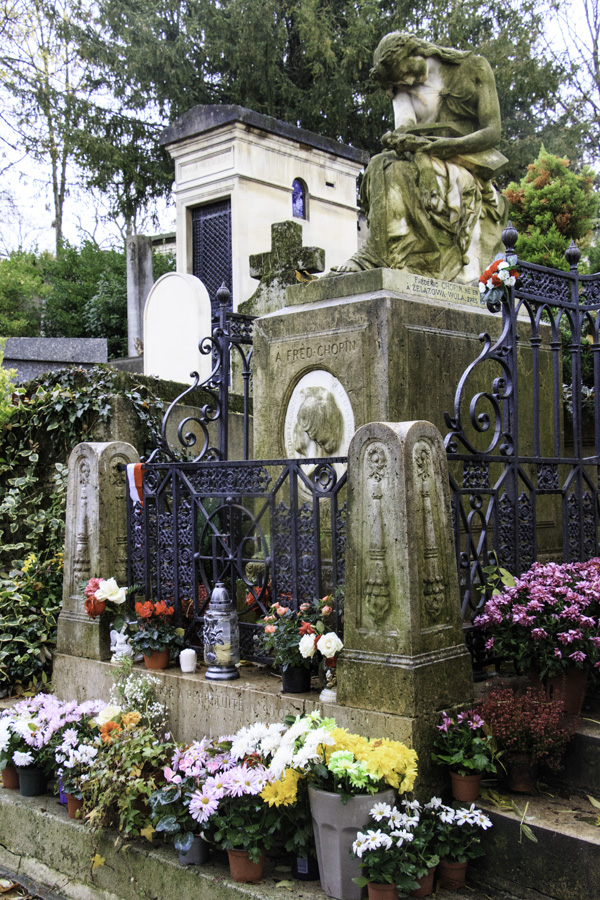 The celebrated composer, who arrived in Paris when he was twenty-one, longed for his native Poland throughout his life. His death, at age 39, was commemorated with a funeral service at the Church of the Madeleine, where Mozart’s Requiem was sung. His pallbearers included close friends, the artist Eugène Delacroix, and cellist Auguste-Joseph Franchomme. His tomb features a portrait medallion in marble sculpted by Jean-Baptiste Clésinger and a figure of a girl representing the Greek muse of music, Euterpe, her head bowed in grief holding a lyre with broken strings. Through an unusual request by his sister before burial, Chopin’s heart was removed and taken back to his native Poland. It rests in the pillar of the Church of the Holy Cross in Warsaw. 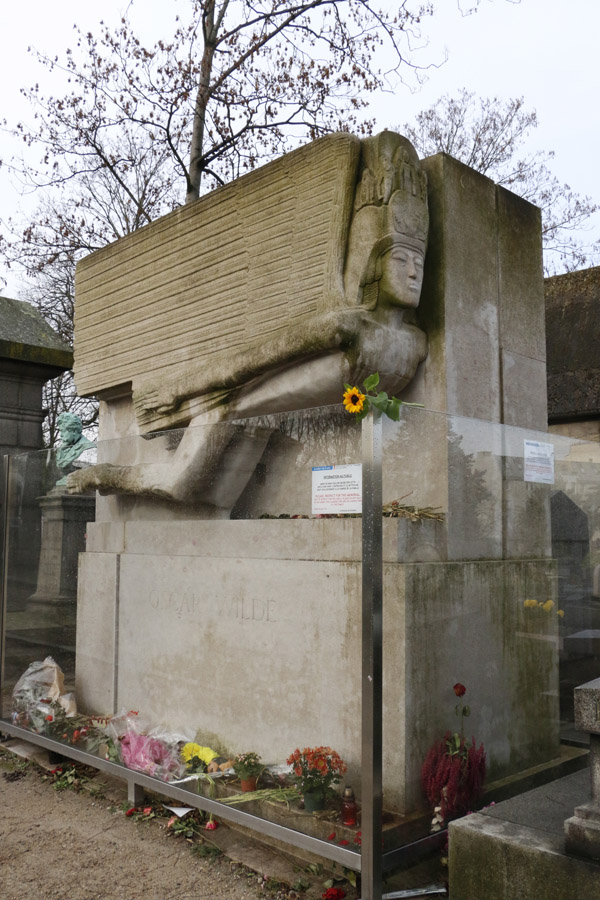 A startling sculpture by the American artist Sir Jacob Epstein now marks Wilde’s place of rest in Père- Lachaise. The scandal provoked by this sculpture was the last associated with Wilde. It shows a markedly virile sphinx with a very prominent male organ (since vandalized), crowned with a tiara, and emerging from a mass of stone. The monument is a place of pilgrimage for Paris’ gay and straight literati. Flowers are frequently left for “the martyred poet,” and in memory of Wilde’s life-long friend and champion Robert Ross, whose remains are entombed with him.

An epitaph in Wilde’s own words is carved into the stone on the back of the tomb:

And alien tears will fill for him
Pity’s long-broken urn
For his mourners will be outcast men
And outcasts always mourn.

Follow the scent of marijuana wafting in the air or the parade of young people, and more than likely you will be led to the final resting place of James “Jim” Morrison, legendary singer, songwriter, and member of the rock group The Doors. Morrison loved Paris, and in 1971 he moved there with his girlfriend Pamela Courson. He wanted to take a break from the pressures of The Doors’ meteoric rise, the demands of a grueling concert schedule, and the constant onslaught of fans wanting more from the “Lizard King.” While in Paris, he supposedly fell back into alcohol and drug use and was found dead of a heart attack in the bathtub of his apartment on the Right Bank. In 1971, a small, private funeral was held in Père-Lachaise with Pamela, his manager, and a few close friends in attendance. The low double plot, purchased à perpétuité (until the end of time), is crowded between two tall tombs. Decades later, Morrison’s family installed a bronze plaque on the headstone inscribed with the Greek words ΚΑΤΑ ΤΟΝ ΔΑΙΜΟΝΑ ΕΑΥΤΟΥ (which can be translated as “True to his own spirit”).